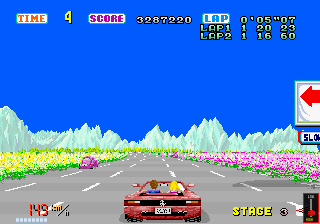 Here, I'm on Stage 3 and I've printed the lap-times for the previous two stages using the unused code routine. The lack of apostrophes in the additional lap print outs indicate that this idea was probably pulled at an early stage.
Code decompilation is progressing nicely. I'm on track to finish this year.
Posted by yt at 11:54 pm