You might think that after years of pulling OutRun apart I would have exhausted the hidden extras. Not quite yet! Here are a few unused sprites that are in the game. 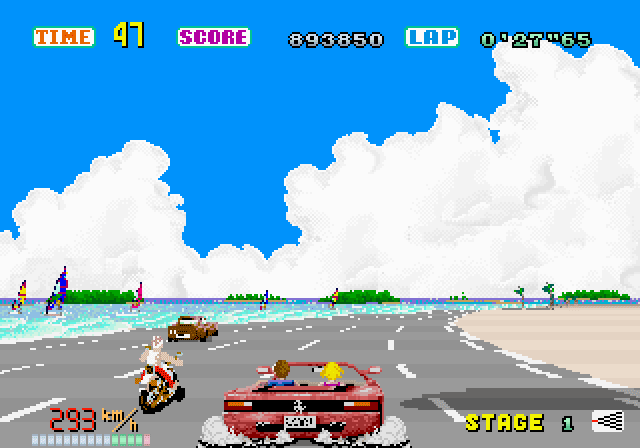 Firstly, here's a motorbike that didn't make the final cut. The above is a mock-up to show what it would look like in-game. There is a preliminary data structure to hook the bike up in the game code, and that data structure is similar to the existing traffic entries so we can assume this was an early attempt to include other forms of traffic. However, the final higher level data structure is missing, which would include the palette information. So I've just used a random palette here. 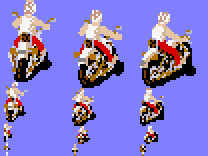 Here's an extra frame from the end sequence with the genie. I guess there was originally concern that it wouldn't be clear who the genie was, so the extra frame on the left was made. 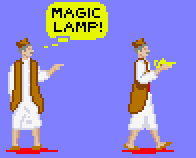 Finally here's another end sequence idea that was dropped. The existing sequence sees the guy kissed by the girl awarding the trophy, before flexing his muscles. It looks like the original plan was to also have him fall over. You can see the extra frames below:

You can use my quick and dirty sprite viewer to browse sprite data in other Sega titles.
Posted by yt at 11:55 pm

More good stuff from yt! Are you planning on releasing the source for the sprite viewer as you said you were going to do in the original Nov 2012 post when you released it? It's just that I primarily work in OS X and it would save me the hassle of booting a Win VM to use it every time I want to examine sprite data. It's an SDL app from what I can see so porting it should be relatively easy.

I forgot about that actually. I've uploaded the source here.

I haven't had time to integrate CMake, so for now it's a Visual Studio project. It shouldn't be hard to get it cross-compiling. But I just didn't get round to it.

Thanks for the source Chris. Hopefully I'll get a bit of free time this weekend to have a crack at porting it.

Do you think you can manage to put the biker back into the game?

It doesn't really fit the theme of outrun imho, but hey options are always nice.

It could be done relatively easily on cannonball. Would look very strange though when you collided with the bike as the rider would drive off and yet your car would go into a spin.

Having done a bit more work on sprite placement in layout its also apparent the palette for this graphic isn't present.

So the super scalar tech is really just different sized sprites? I saw post on the web saying the sprites were scaled in real time.. I guess not?

The hardware scales within a limited range of values, but different key frames are required.