Thanks to David Haywood for alerting me to the following information. Checkout his blog if you haven't already, it's a terrific read.

It would seem that OutRun shipped with a corrupted ROM containing some of the percussion samples used by the music tracks. Every music track bar Last Wave, is affected by this. Even the original sound track CDs, recorded from the production boards, contain the glitch!

The offending rom, opr-10188.71, appears to have a single bit stuck high (xx1xxxxx). The sample data is distorted as a result.

Hiro Kawaguchi, the composer, had this to say on January 18th 2007 when discussing the 20th Anniversary Edition release:


Isoda (recording engineer) listened the sound of OutRun before recording, then he noticed that drum sound is very noisy. This is strange, so he checked the board. Then he found one of the ROM is bad (bit6 is always ON)."

Using Google translate, he goes onto say they recovered the original samples from the CP/M format disks for the 20th Anniversary boxset.  Listening to the 20th anniversary rendition, it is indeed correct. However, older versions, including the 1996 Sega Saturn release appear to contain the glitch. 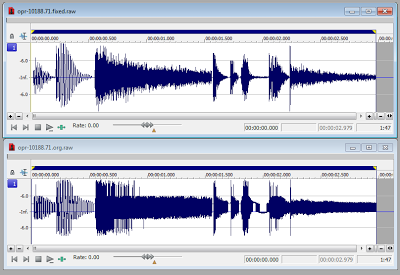 The fixed version has not made it into MAME, due to their focus on reproducing the original experience accurately. However, there's no reason this fix can't be incorporated into Cannonball or the Enhanced Edition.

The samples in this file include the wood blocks and big cymbal crashes. The most noticeable difference is for Splash Wave, which uses many of these samples in it's introduction.

The improvement is most noticeable when using decent headphones or studio monitors.

Edit: I updated OutRun Enhanced Edition with a patch for this issue.
Posted by yt at 6:35 pm

Are the mp3 files available here correct? Looking at them in Audacity they look pretty much the same, with just a time offset.

Yes they're correct. You're not going to visually see a big difference in the waveform on the final track as there's a load of other instruments around the percussion.

If you listen on a good pair of headphones or studio monitors, you'll hear the woodblock clicks are more defined and the cymbal crash less distorted.

Patch the original rom using the Enhanced Edition pack and then compare the files for yourself.

I can hear the difference easily. Snacking that this went largely unnoticed for 20 years.

I suspect it's because the original cabinets didn't have the best sound quality to begin with.

The problem is more noticeable (as Hiro found) when listening to the tracks back in a better environment.

Still, I'm surprised this wasn't noticed when mastering the OST back in the 1980s. Although having said that, the quality of the recording on the first few releases wasn't great anyway...

Actually, the original cabinets had an audio setup that was considerably better than average for the time.

This is just a personal opinion, but I think the era in which OutRun was released may have played something of a serendipitous role - bear with me.

The iconic "80s" drum sound was in fact due to either the SSL talkback channel, or a heavily-compressed and gated effect chain. Classic examples include "In The Air Tonight" by Phil Collins, "Every Breath You Take" by The Police, and "Higher Love" by Steve Winwood. However, the sound itself was copied by countless artists and producers.

The effect itself amounted to squeezing the sound to the extent that it would cut straight through the mix and then use the gate to quickly cut to silence.

It just so happens that the "corruption" described here more-or-less mimics this effect perfectly, and so to the audience of the time it would not have sounded strange.

Funny this should come out now, as I'd always assumed that the drum sound was due to deliberate pre-processing of the samples. Funny old world, isn't it? :)

PS. In fact my original Amiga MOD/XM versions of the tunes all featured drum samples that had said effect applied. I'm currently re-working these by sampling the OPM softsynth (with a MAME dump of the original sounds) for a more accurate conversion.

Would it be a big effort to create an editor for songs in Outrun? If we can convert the song format in the roms back and forth to midi and extract the samples used, any sequencer would pass.

@Unknown: Yes it would be a decent effort, but it's on my todo list for the future.

Btw, the notation for the OutRun songs can be found in the inlay to
Sega Game Music Vol. 1

I suppose you already know...

So, you can get original PCM data from 3DS version.

Grab the patch from the Sega Enhanced package.

Thanks but you have to register to download that and I don't have an OutRun Cab. I don't understand why the opr-10188.71f can';t simply be availabjle to download?