Wrote a quick tool, which takes an Outrun CPU 0 memory dump from the MAME debugger as input. As output it prints the jump table from that stage of the game that has been built and stored in RAM.

This is handy, because it formats the data and only shows the addresses which are currently enabled, and doesn't repeat addresses when they're called in succession. The table in RAM itself is 124 entries long, and updated at various points during runtime.

So here's the in-game output:

This has made it easier to figure out exactly where in code the program is updating this table.

What else? I've been looking into the tile handling code. Tilemaps are used in OutRun for the horizon graphics (two layers) , the text layer is a tilemap and obvious things like the music selection screen are a tilemap. Each tile entry in the map is a word. The compression format for the first tilemap I've analysed in ROM is as follows:

And here's how OutRun manages to store your exact route history through the levels in just a byte.

3/ Later this indexes into a lookup table, which then makes it easy to update things like the stage map at the bottom right hand corner of the screen during gameplay.

Other than that, I'm thinking about how to represent the graphics once I convert the engine to C. Do I keep them in a similar format, and just render a final array of pixel data (similar to how an emulator would render it's display), or do I convert them to a native PNG or similar? This would make it easier for someone to replace them and change the game, but could run into problems with palette changes and so forth. Thoughts...

Anyway, this post might give you some idea of some of the things I'm doing at the moment. There's still a long way to go.
Posted by yt at 10:18 pm No comments:

Quick progress report: Commented all the code relating to detecting when the car is off-road. Figured out the memory location that determined which wheel was off. Established the memory location that determined the width of the road, and handles splitting the road between number of lanes and individual roads. Commented some slightly less interesting code relating to lap times, output lamps and various other areas.

Amusing OutRun link: Unbelievable. I have found someone with a more insane project than my own. A real world OutRun cabinet containing a golf-cart... The mind boggles?
Posted by yt at 11:10 am No comments:

I reached a point where it was time to switch to a competent interactive debugger, instead of working out of a series of text files that were becoming increasingly difficult to manage.

It took me a good few days to transfer my comments and knowledge to the new system. But the payoff is massive - I've immediately spotted mistakes, and identifying blocks of code has become a lot less painful. 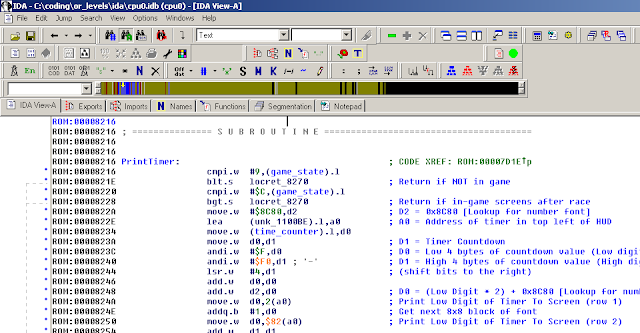 In the screenshot you can see the commented block of code that transfers the in-game timer to the on-screen HUD.

Yesterday I also documented how the main branch table works in memory. In fact, I'm not even sure if branch table is the correct terminology. Figuring this out was important because actually determining the program flow in Outrun is tricky. The list of functions that are finally called is generated at runtime, and differs at different points of the game.

I presume this is some kind of optimisation, but it seems to add a lot of indirection and makes following the flow of code rather tough from the onset. Maybe some level of obfuscation was the idea? Perhaps someone reading who is a 68000 wiz will know.

Update: Figured this out. Some useful information in the comments regarding this from one of the blog readers and myself :)
Posted by yt at 3:08 pm 3 comments: