At last, here's a new demo of the OutRun engine. The entire game is ported, aside from sound and the service mode.

In terms of functionality, this release is bare bones. There is no menu system yet, all options are hardcoded and you have to play the game windowed.

It would be great if you could report bugs (and I'm sure there will be plenty) in the comments below. Please verify any subtleties against MAME for reference. 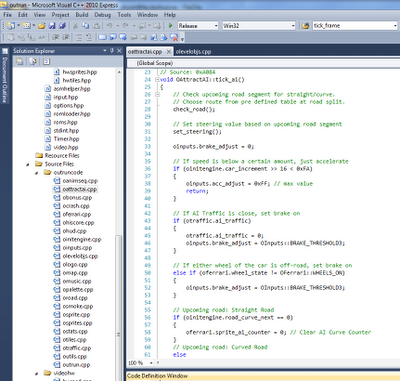 
In a future revision, there will be options to custom the controls and the analogue sensitivity. I find MAME's default setup too twitchy, so you'll find the steering a little more heavy in comparison.


In a future revision, enhancements will be optional and there will be a menu toggle to enable/disable them.

Here's another bug in the original game; the leftmost two end sequences have a palette issue which causes the male sprite to suddenly change in appearance. In the screenshot below, we're approaching the goal banner. 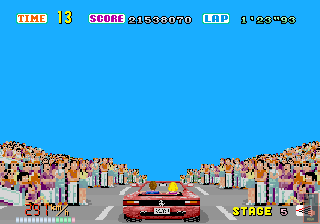 Then, as if by magic, the colour of the man's top changes to light blue! 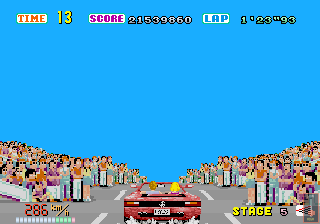 But don't worry, on reaching the finish line it's back to dark blue again. 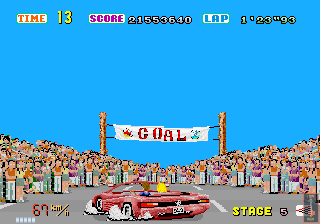 The game code swaps to an animation playing routine at the point of the colour change. It should be seamless. But it seems as if 2 of the 5 end routines are configured incorrectly.

Why am I noticing such trivial details? Because the engine is now complete (minus sound and test mode). Expect a test release in the next week!

In other news, I updated the Philko bootleg page with some new pictures.
Posted by yt at 12:21 am No comments: 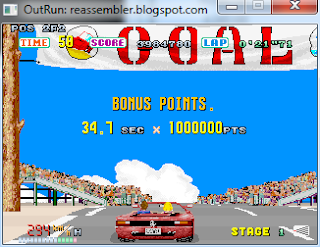