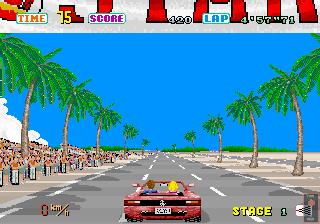 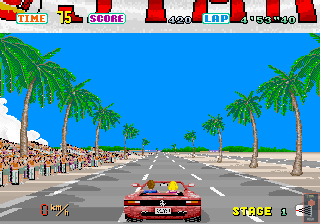 Some good news - the main Ferrari is implemented. Controls are also complete, which means you can drive through all the levels of the game, albeit without collisions or crash sequences yet. The handling feels right though. Here are some screenshots: 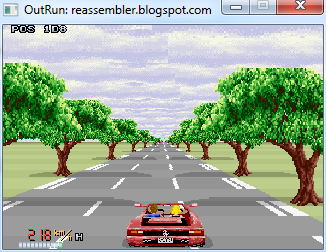 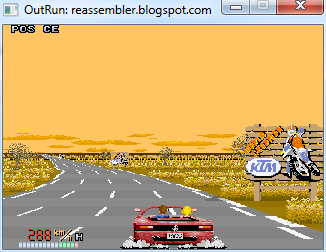 The code, as usual, is rather comical. The original assembler manages to combine sound effect triggering logic, score updates and logic to trigger tyre smoke when turning into sharp bends into one almighty routine. I guess coding practices have come on somewhat since 1986. It's kind of funny to be the first person to delve into this code in over 25 years.

I continue to find bugs in the original codebase, which I'm optionally fixing in my conversion. There will probably be a menu option to toggle my fixes. The latest can be reproduced as follows:
I can patch this bug on the anniversary edition the next time I do a release, if there's demand. I suspect no-one ever noticed it though. Can it be reproduced easily on hardware?

Update: Yes, it's been reproduced on hardware. Interestingly, it can't be reproduced on the Sega Saturn port.
Posted by yt at 10:40 pm 13 comments:

At last, the core level engine that handles rendering of levels can be deemed complete:
Being OutRun, there was an unbelievably large amount of code to handle the level transitions. For example, the road split works via a giant 15-way switch statement that looks at your position and sends commands to the sub CPU to alter the road.

So now it's onto gameplay. I've been coding the routines to render and control the Ferrari. This higher level code is far easier to work with than the core level engine code. Debugging an error in this area of code now thankfully  involves a few minutes investigation, as opposed to the days some of the core rendering bugs took.

The code is atrociously messy in places. For example, the logic to handle smoke under the Ferrari's tyres seems to have been inserted pretty much everywhere: in the road splitting code, gear changing code, level object rendering code etc. There is nothing modular about this game!

To compensate for this, I allow my ported C++ classes to all access each other. They still have private members of course, but there's a global public reference to the class itself. The code could potentially be refactored at a later stage, but for now the focus is getting it ported and working.