I'm starting a new job soon, so there's likely to be a short break in proceedings. In the meantime, here's a video showing object placement and the new preview window. This makes using LayOut so much more fun.

Progress is a little slower than I would like, but hey, we've waiting 27 years for this so maybe it's not really an issue.

Those of you who watched the previous LayOut video will have noticed one significant problem; whilst editing the track technically worked, the visualization of your actions leaved something to be desired.

As planned, I've moved on to editing sprite placement next. And in doing so, I incorporated a real-time preview of the changes you are making. If you create a new curve, hill or even change the placement of an object, this is updated in real-time. You can also change the camera angle by dragging in the preview window with the mouse. 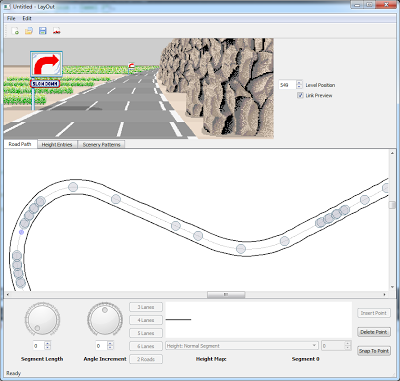 In this screenshot, I've imported the Devil's Canyon track. The 2D path is shown in the lower panel, and the actual rendering in the top panel. The panels can be linked so as you scroll through a level, the placement remains in sync. The 2D window is in scenery editing mode. The large dots indicate the start of a 'segment' of scenery items. Scenery in OutRun is segmented like this, so that patterns can be reused multiple times to save on storage space. Each time you use a segment, its length is variable. Segments wrap if the length exceeds the number of items in the segment. 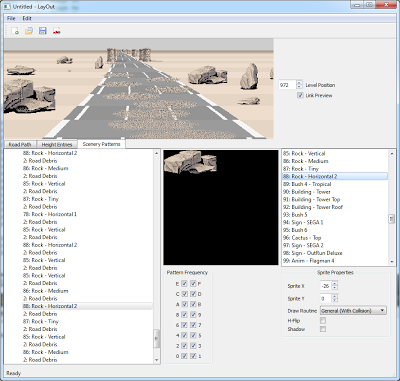 Switching to the scenery tab, you are immediately linked to the segment selected in the 2D view. There is a lot of complexity here, and I haven't even finished work on this part of the editor. The list on the left represents the segment and shows the list of items used in this section. Here you can see items including, rocks, road debris and so forth. The timing at which this list is rendered is affected by the pattern frequency. The engine can render two sprites per road position. Although it's possible to create the illusion of more. For example, on the Gateway stage the top beam is actually positioned behind the pillars. Or you can adjust the y values in some cases.

Clicking an item in this list invokes object specific properties on the right hand side. In this case, you can edit the x and y position, select whether to horizontally flip the sprite, whether the object has a shadow and the custom draw routine used. Changing these properties only affects a single entry of the item in the segment. All of this is of course based on how the original OutRun engine works.

Where we deviate from how the original engine works is with the new preview window. The preview window is cool because you can just say 'show me the track at position 704'. The original engine doesn't work like this; it must render the entire level from start to finish. If you were to hack the original game so that each level started at position 704, you would see something completely incorrect. Similarly, there is no easy way to reverse backwards through a track and this is now possible. The downside to this is that it adds complexity and possibly bugs where the rendering deviates. The upside in terms of previewing all changes in real-time is immense though. You can position the camera on the track, create a curve and watch the environment change in front of your eyes as you turn a dial.

There's still a lot of work to do; it's a relatively complex project, which I guess is why no one has attempted it before. Additionally, I haven't done a lot of GUI based application development before, so I'm learning as I go.

Neil from the OutRun and Space Harrier Replicas project has kindly made this rather stunning logo for CannonBall.

For now, it's only featured on the CannonBall page, but I will incorporate it into the build itself in future. I do plan to get back to CannonBall and add hardware rendering and other new features when LayOut is released.

I also moved the standard CannonBall download page to a new cleaner page on github. The old blog page was full of dated comments and somewhat messy.
Posted by yt at 12:55 am 2 comments: