Here's a video showing a (not very playable) level I made whilst testing and bug fixing.

Things are really coming together now. It's possible to make a level that's more varied and interesting than most of those found in the original game. You can quickly export to CannonBall with a single button click and be playing instantly. 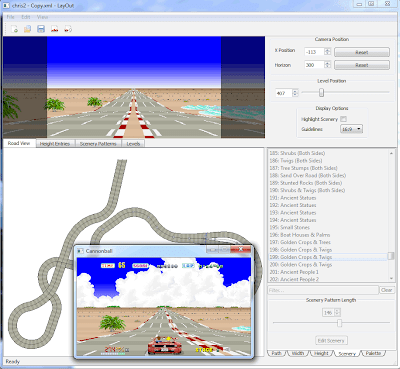 I coded some handy routines to quickly generate your own sky palette and ground palette, interpolating between two colours. Here's an example I generated in just 15 seconds. 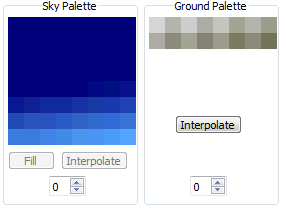 I improved the interface and usability in certain areas as well, including the addition of zoom to the top-down road view.

At the moment I'm not really coding anything that interesting. I'm basically making a level and fixing any small bugs I encounter along the way. There are lots of minor bugs that arise in an application this complex and they take time to fix.

At the end of October I'm going to feature freeze completely. In November, I'll write the documentation, packaging the accompanying release of CannonBall and preparing for release. I'm excited at the prospect at releasing this thing.

In the meantime, check out this great article (in French) regarding unauthorized advertising in arcade games. It makes use of the System 16 Sprite Viewer I posted some time ago.
Posted by yt at 12:13 am No comments: