The original Japanese release of OutRun had different track layouts to the final Western release. Overall, the game is tougher with sharper unforgiving hills, and more aggressive turns.

This selection of tracks is less polished; Coconut Beach is nowhere near as rich in terms of design and the overall difficulty curve doesn't feel as good.

However, it's great to see the evolution of the track design between versions. And Gateway has some cool twists and turns that were removed due to it becoming an easier stage in the Western version.

The next Cannonball release will optionally allow you to play both versions of the game. It needs a little more testing (i.e. playing) before it's safe to release. 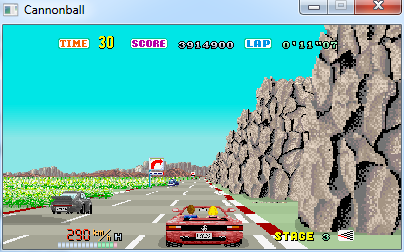 Devil's Cannon is known as Walls in the Japan version. The layout and sky colour are different. 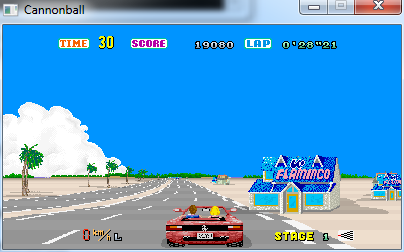 Japanese Coconut Beach. Not as cool as the final version.
Posted by yt at 6:10 pm 1 comment:

Cannonball 0.13 is out!
There are a lot of changes, so it's possible there are also bugs. Please report anything you find. 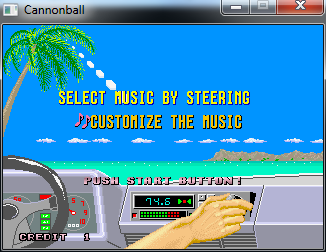 Configure Cannonball to play WAVs instead of using the inbuilt game music. Configure the name of the replacement tracks for full ingame integration!

Please note, I do not intend to support additional file formats like MP3. This is a decision to avoid bloating the codebase with third party libraries. Convert your files with a free audio editor like Audacity. 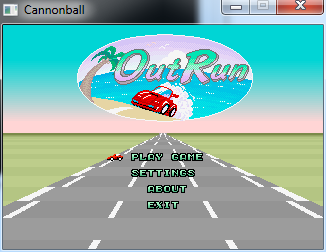 Digital gamepads are supported. You can even change the digital sensitivity, so you can recreate the twitchy Sega Saturn conversion experience if you desire. Be sure to connect your gamepad before starting Cannonball.

All keys and joypad buttons are fully configurable.

I will support analogue whenever I buy a controller for testing. Or if you're in a hurry you can donate me one. :)

There's an app icon, ability to toggle extra level objects, fixes to the mingw compile and more.
Check out the commit history for more detail.

I will update the online manual tomorrow.

Whilst creating Cannonball, I uncovered a large section of unused YM2151 music data in the Z80 program code. Initially, I was excited - could this be an unreleased Hiroshi Kawaguchi classic?

Unfortunately, after hacking the code to play the data it sounded like garbage. I wasn't sure if this was a problem with MAME's emulation, so I asked Alex of the OutRun bootloader project to play the sound on hardware. He sent me the results, which you can download here as an MP3.

It still sounded wrong, so at this stage I stopped investigating. It wasn't until later that night when I randomly happened to be playing the Space Harrier soundtrack on vinyl, that I came across the following composition:

I wonder if this is the Space Harrier Wiki Jumbo track embedded, but playing incorrectly due to other modifications to the sound code? It's a shame, because otherwise we could have hacked OutRun to have an additional tune. Perhaps it's still possible with some additional work...

This maybe isn't a big surprise, we've already uncovered other segments of Space Harrier in the OutRun code. 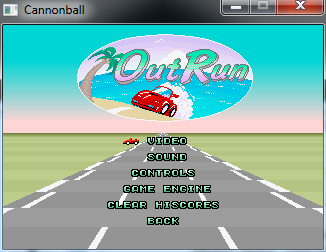 The play area can now be extended to widescreen. The internal resolution is set to 398x224, which is approximately a 16:9 aspect ratio. This means the screen is 25% wider and you get to experience more of the game world. The widescreen mode can be played windowed or full-screen as normal. 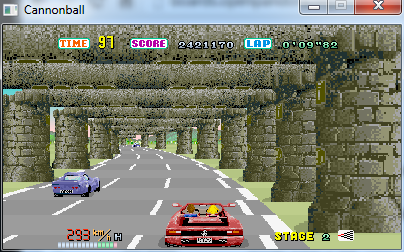 There are some things to note about this mode:
I've updated the source code and the Visual C++ binaries. 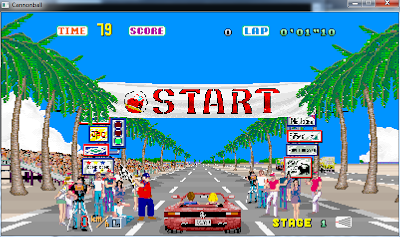 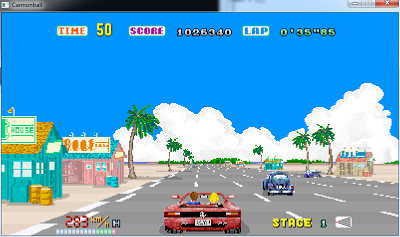 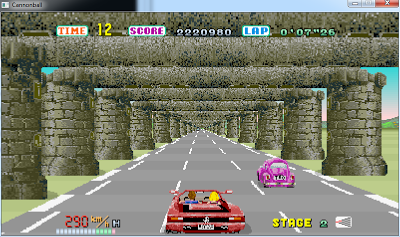 Still a number of bugs to be fixed and things to be figured out before I release this :)

Update: It's done. It's actually quite awesome to play OutRun like this. I'll post some binaries later this week after further testing, or you can build right now from the develop branch...
Posted by yt at 1:23 pm 3 comments:

Congrats to Seb, who has ported Cannonball to the Open Pandora handheld. 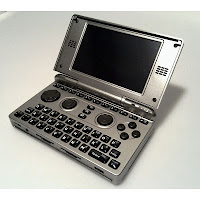 Download it from the Cannonball binaries page. More details, including the source code, can be found in the thread here. 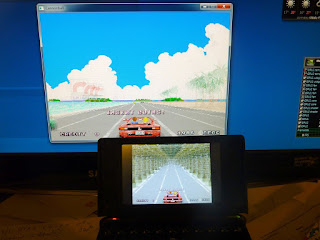 Currently, it's running at 30fps but does support the other bells and whistles. Reportedly, it's a better experience than playing OutRun under emulation on this platform. I've rolled some optimizations into the develop branch on github, which should help ports of this nature.

I apologise for the lack of updates recently. Sadly, my house got broken into so I've been busy organising personal matters lately. Some OutRun memorabilia was stolen too which was a real shame as it is probably not replaceable  and will no doubt just be junked. On a positive note, I'm going to investigate a genuine wide-screen mode for Cannonball as my next endeavour.

Firstly, thanks for the kind words and interest surrounding the project. It's much appreciated. I've taken some of the initial feedback on board and released a new version.


Binaries are here.
Source code is here. (get compiling for some different platforms!)

I'll be taking a break from coding over the next week, before diving back in and adding configurable controls.
Posted by yt at 9:14 pm 37 comments: 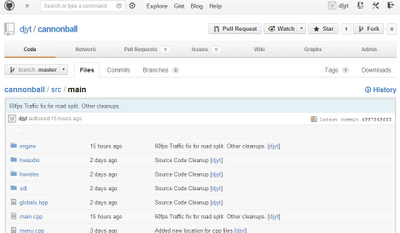 Why do this? Because I love OutRun, and no one else would have done. Thanks to those who have followed the project up to this point. Any questions - post them below!
Posted by yt at 7:38 pm 5 comments: