It's the 27th anniversary of OutRun and we're long overdue a post about what I've been upto. Things may have seemed quiet, but that's only because I've been working intensely on LayOut behind the scenes. I say intensely, but as I'm married, 33 years old and have a full-time job in the games industry, finding spare time to program can be a luxury!

Excuses aside, yes, I thought I'd finish this project sooner. It would have been great to release LayOut for the anniversary. However, during development I came to the realisation that producing an editor people loved was more important to me than simply releasing a rushed product. And this is a hobby, so it's important that I love working on it myself.

Along the way, the feature set has ballooned beyond what I originally planned and LayOut, whilst imperfect in many ways, is greater than ever imagined. Let’s consider the features so far: 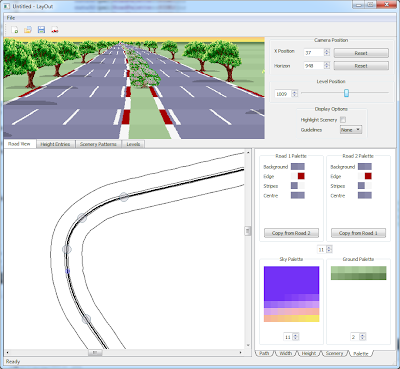 Realtime Level Preview
Full visualisation of the stage you are editing. All changes are shown in realtime. This uses a special widget that is an enhanced version of the core OutRun rendering engine from CannonBall.

Full road path editor
Define the path of the road, set the number of lanes and split the road into two. 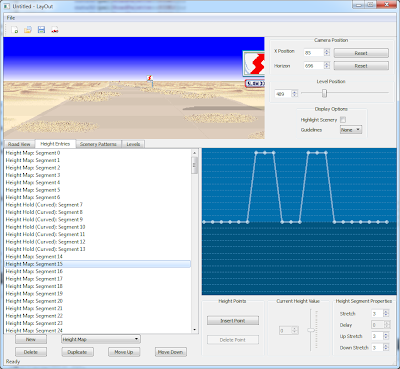 Height Map Editor
Create 2D height maps, apply them to any section of road and preview your work in realtime. Every option is configurable, including options available in the original engine but not used by OutRun's levels. 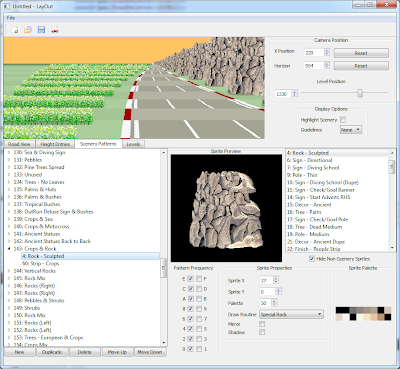 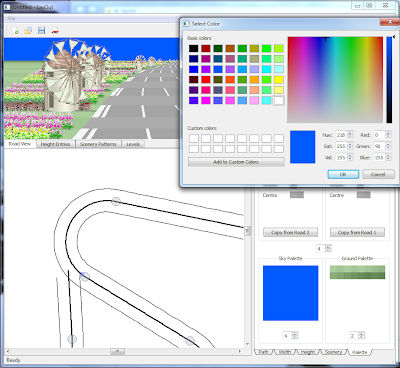 Palette Editor
Change the road, sky and ground colours. I will also implement sprite palette editing in the future so you can change the colours of everything in-game. 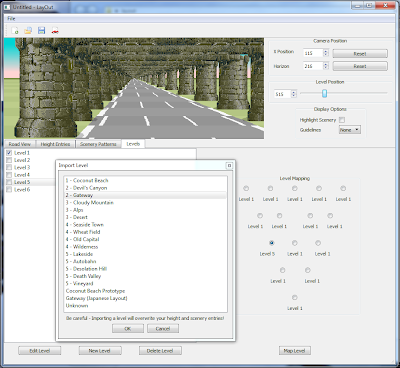 Level Mapping
Easily change the order of your levels, and map them to the 15 stages available in OutRun.

Multiple Export Options
Easily export to CannonBall. I'm simultaneously working on a new version of CannonBall to handle the exported level data. Shortly after release, I will work on an exporter that allows you to write directly to the original arcade ROM images. Yes, you'll be able to play your levels on arcade hardware.

Cross platform & Open Source
Coded using QT, the editor will function on Windows, Mac and Linux. The editor will be released under a similar non-commercial license to MAME.

Common questions I tend to get asked, that I will cover here:
1/ What about other games?
Whoooa one step at a time fella! Super Hang On uses a very similar track format so it wouldn't be inconceivable for me, or you, to add support in the future. But let's get OutRun to a good place first.

2/ What about sprite editing?
Yes definitely, in a future version. It's more complicated than you might think to do this properly.

3/ When will this be released?
I would expect November 2013 at the latest. Followed by a series of frantic updates.

I’m also thinking that we probably need to get a forum setup for discussion once the editor is released. Does anyone fancy hosting that?