Whilst you're patiently waiting for me to finish force feedback support in Cannonball (it's going well), here's a Space Harrier Easter Egg for you to try.

It's similar to the OutRun egg, in that it provides a Yu Suzuki development credit, along with the development date. Interestingly November 1985 was around the date the AM2 team started OutRun, which probably explains why the team used the Space Harrier code as a framework to work from. 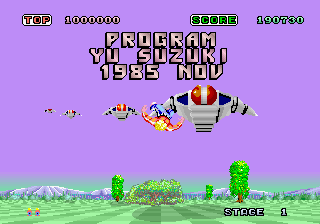 Like most AM2 titles, the egg is somewhat tricky to activate. You need to enter the code during the death / respawn sequence; therefore after the character collides and flips upwards or is flashing.

The code is:
You can enter the code over multiple iterations of this death sequence. So you can start after the first time you die, and complete it the second time you die. However, any error in input resets the code, so go carefully.
Posted by yt at 6:05 pm

These are my favourite posts here, thanks for sharing :)

Funnily enough I triggered Outrun's easter egg as a kid in the arcade. Down to 2 seconds and with the checkpoint in sight I mashed every button I could find to fire an interrupt that might get me over the line and that's how I got the message up. ;)

Thanks a million for your work !

I wonder if you could add an option to alter the driving view, so it would always be like this :
http://2.bp.blogspot.com/-njr7DW7PHXE/UPLz0N8QVdI/AAAAAAAAAf4/JMb8sbTUNig/s1600/Image7.png
(a bit higher, that is)

I always loved that view but it only happnes in some sections of the game...

geoslake: Yes, I am planning to do that actually in a future release :-)