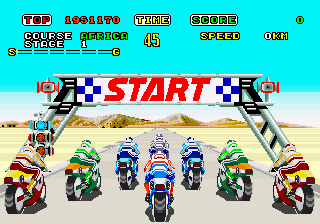 One other example of code reuse I've found is between OutRun and Sonic the Hedgehog 2 on the Megadrive. Both games share the same random number generator, right down to the default random seed that's used.
Posted by yt at 10:22 am

I really thought that Hang-On (1985), Outrun (1986) and Super Hang-On (1987) were separate projects. Does Outrun borrow from the old Hang-On code or was Outrun written from scratch then Super Hang-On shared code from Outrun only?

I haven't checked the Hang-On codebase yet.

Super Hang-On definitely borrows code from OutRun. And bear in mind I only checked the slave CPU code.

Whilst many functions are the same, the code is modified in areas and not completely identical. For example, there are a lot of special cases to handle the road split in the OutRun codebase that aren't present in Super Hang-On.