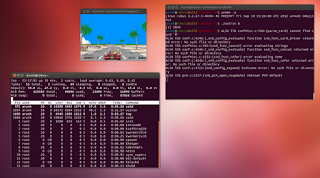 I've decided to name the OutRun engine Cannonball, after the 1981 Cannonball Run film that Yu Suzuki was inspired by.
Posted by yt at 9:25 pm

Ah, but unlike Cannonball Run, your co-pilot is a lot easier on the eye than God (or even Dean Martin, for that matter)

Can't wait to play with the source!

I loved the Cannonball Run as a kid. It's an awful film really, but nostalgic to watch.

The source is up on a private github repository now. It's not quite ready for general consumption yet. Did you have something specific you wanted to do or try?

I started with Cannonball on the PI last night and have very little success so far. :-/

I have in mind to create an .IMG file of a minimalistic Raspbian installation which boots directly into Cannonball running in SDL DirectFB-mode. To have an instant arcade for your pocket ...

RIght now the binary crashes on X11 (seems like bug inside libSDL) and just renders a black screen on DirectFB, tho. What is the setup you are/were using?

Marcus: I'll speak to the chap who did the original port to see if I can get you the setup he used.

If you e-mail me (see my response to your original posts about the Mac port) I will try to help.

Can you successfully compile and run the SDL test program that comes with SDL?

I was able to compile simple test programs and run them on the PI in both directfb and X11 (both local and forwarded by ssh -X).

BTW, I dont have your email address and clicking on the symbol in your blog doesn't work either. :-)

Marcus, the reponses I mention are here:
http://reassembler.blogspot.co.uk/2013/01/higher-resolution-mode.html