Following Camino’s optimization, I performed a similar treatment on Cruising Line, the remaining 3DS track. I reduced the track’s filesize from 24K to 9K using a similar set of techniques. Cruising Line does not suffer from the quantization issues that plagued Camino, which made the process a little easier and yielded even better results. So far so good and there was plenty of ROM space left to stuff with additional music! The next Enhanced Edition will contain three new audio tracks, which is an amazing result.

Originally, I considered bringing the new Switch music into the fold: Radiation and Step On Beat. However, from a subjective point of view, neither of these tracks are particularly great. I felt like they didn’t sit harmoniously with the existing music, and I wasn’t prepared to spend many weeks optimizing music I didn’t love. 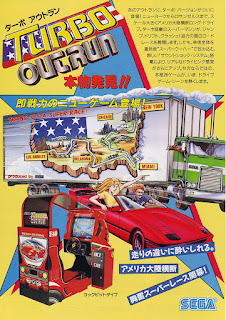 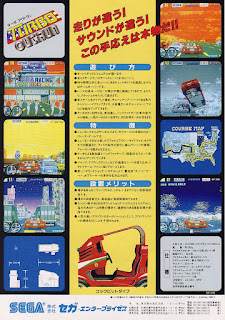 Turbo OutRun - A prime example of what happens when you don't understand your own product.

Instead, I turned to another reference point in the OutRun universe - Turbo OutRun. Whilst Turbo OutRun is arguably a disappointing sequel, the soundtrack is impressive. In particular, Yasuhiro Takagi’s ‘Rush a difficulty’, which is an upbeat number that wouldn’t sound out of place in the original game. As an aside, Takagi went on to become sound director for Shenmue II, before moving to the Yakuza series.

Turbo OutRun runs on the same hardware as its predecessor so, on the surface, the idea of converting the music might appear simple. Being a hand-crafted piece of MML, we wouldn’t need to worry about the rigorous optimization process required by the 3DS audio. However, the audio engine embedded in the Z80 program code isn’t identical. Between OutRun and Turbo OutRun Sega added a number of improvements to the engine. Firstly, an extra 3 PCM channels can be utilized by music, bringing the overall number of simultaneous samples to 8, bolstered by the usual 8 FM channels. (On OutRun, these 3 channels are strictly reserved for sound effects and can’t be used by music.) Secondly, samples can be played at different pitches. Let’s say the composer took a sample of an electric guitar chord, this could be triggered at different pitches and replayed like an instrument. AfterBurner used this functionality to great effect with its guitar-laden riffs. Whilst the samples are 8-bit, and relatively lo-fi compared with clean Yamaha FM patches, they add depth and grit to the overall mixdown when used wisely. In order to backport the music to OutRun, considerable changes would be needed.

So, the Turbo OutRun engine uses additional channels and manipulates sample pitch intelligently. It was time to decompile the necessary sections of Turbo OutRun’s Z80 code to start analyzing the raw music data. A starting point was the PCM channels, as we potentially needed to remove or remap the extra ones. It was immediately clear that 2 PCM channels were permanently disabled. Interestingly, the disabled channels contained an early draft or a guitar riff for the tune that sounded unfinished when reactivated. This was good news, as it meant there was only one extra channel of audio to worry about. The extra channel contained a sampled driven slap-bass line. Converting this back to OutRun would be problematic. It would involve finding space for the slap-bass sample in the, almost full, sample ROMs and backporting the pitch manipulation code. Plus there wasn’t a spare PCM channel to use anyway, so this was a non-starter.

The bass line was an essential ingredient of the track - it sounded sparse without it. I decided to recreate the bassline as a YM patch/instrument. CMonkey had the great idea of sourcing a patch from a Megadrive rendition of Rush a Difficulty. The patch wasn’t perfect, but proved a good starting point for further manipulation. I used the VOPM plugin, which emulates the Yamaha 2151 chip, to modify the patch further, before converting the data back to the format required by the OutRun engine. 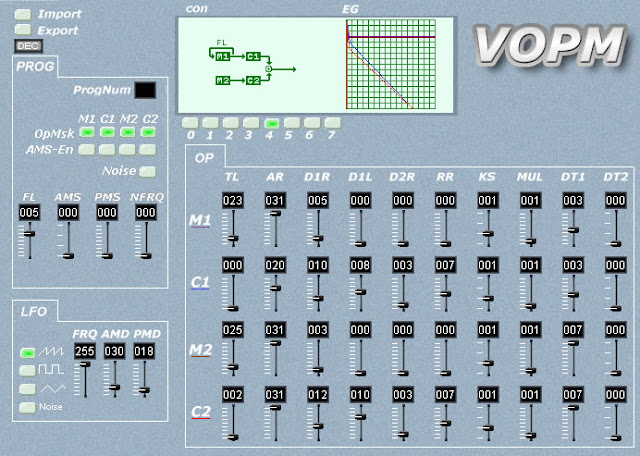 A YM patch will never sound as beefy as a sample, but it’s not a bad compromise. I replaced a, sparsely used, existing YM channel that didn’t contain a strong lead with the bassline.

The next hurdle was remapping the track’s percussion. The Turbo OutRun music utilises a different set of drum samples. Now, we could theoretically replace all six sample EPROMs on the PCB with larger ones to include these new drums, and solder the corresponding jumper. But at a practical level, this seems like a big ask on the poor user just for the drums on a single track! Most of the Turbo OutRun drums have an equivalent in OutRun - kick drum, snare, hi-hats, tom-toms etc. Whilst the OutRun drumset doesn’t contain as much reverb, this seemed like a sensible compromise for now.The only one that’s missing is the cowbell, which I mapped to a wood rim instead.

One final change was needed. The entire Turbo OutRun engine runs at a different timing value to OutRun. To work in OutRun, the engine needs to be temporarily patched to the Turbo value, but only whilst the music is playing. I have a temporary fix for now, which will need to be improved before release. So finally, the track is successfully converted. The main differences are: remapped drum samples, the sampled bassline replaced with a YM patch, with the resulting loss of a single YM channel.

So there we have it. A different challenge to optimizing the 3DS music that entailed rewriting existing tooling, decompiling the Turbo OutRun audio engine and converting the MML data and commands to an older format.

I’d also like to thank cmonkey, without his assistance this would have taken much longer. When working on a project of this nature it's invaluable to have someone to bounce ideas off, challenge your assumptions, and sometimes make you feel (unintentionally) ridiculous. I've been incredibly lucky to find someone who understands the Sega audio engine as well as he does, and I wish I could say more than, "thanks buddy!"

This is AWESOME! Look forward to seeing it MAME, as I don't have an Arcade board..

Will the new tracks make there way into CannonBall?

CannonBall is on hold at present, but I would like to bring them there eventually. You can add WAVs to CannonBall at present to change the music. My main focus is finishing the next Enhanced Edition.